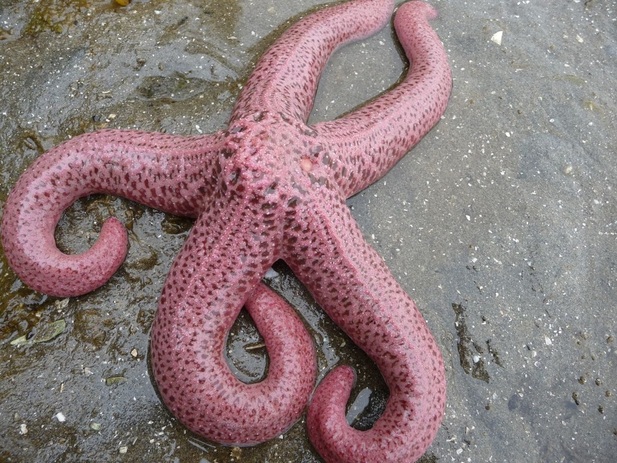 Spiny pink stars found around Calvert Island. Top photo by Chanda Brietzke. Left: a very large spiny pink star photographed by Amanda Cook. Middle and right: A spiny pink star eating a clam. Middle photo displays the underside (oral side) of the sea star. Photos by Jenn Burt.
Identification
The spiny pink star is pink to grey with five stiff rays and a thick central disc. This sea star can be quite heavy, and may grow to more than 64 cm across.

Habitat & Range
This sea star is usually found on soft surfaces from the intertidal to depths of 102 m. Its range extends along the Pacific coast of North America from Alaska to California.

Similar Species
The ochre star can be pink, but does not grow as large and can be distinguished by the network of white spines on its dorsal (aboral) surface. The spiny pink star's aboral spines are less conspicuous, and occur either individually, in clusters, or in smaller networks. Its central disc also tends to be much thicker.

Intriguing Info
Like many other sea stars, including the  sunflower star (Pycnopodia helianthoides), the spiny pink star feeds on clams and other bivalves. This includes the butter clam (Saxidomus gigantea), which can be found up to 30 cm deep in gravel, sand, and mud substrates. The spiny pink star is a competitive predator, sometimes fighting with the sunflower star for food when they both happen upon the same prey item. The purple olive snail has developed a distinct escape response of burying itself in the sand when it senses a spiny pink star. Sea stars use their tube feet to dig out these buried meals. The spiny pink star has been recorded to eat small dungeness crabs (Metacarcinus magister) in California.