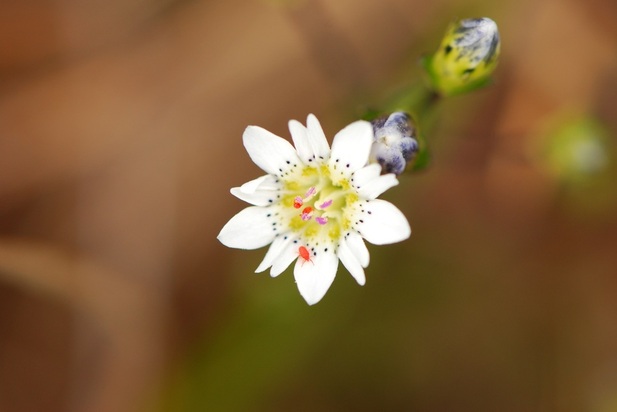 Photo by Kelly Fretwell
Identification
Swamp gentian is an annual plant that grows 5-25 cm tall from a taproot. The stems grow upright and branch often. There are a few leaves at the base of the plant (basal leaves); they are small (to 1.5 cm long), are egg-shaped or elliptical, and form a rosette around the base. The stem leaves are similar in size and shape, and are also not numerous. This species is easy to identify when in bloom: the distinctive flowers are white with small purple spots and streaks; the undersides of open flowers (and therefore flower buds) are purplish-blue. The flowers are tubular (no separate petals): what look like petals are actually five large lobes separated by smaller lobes. The relatively small (to 1.5 cm long) flowers appear singly or in clusters at the top of a stem.

Habitat & Range
Swamp gentian, as the name suggests, grows in wet areas like bogs, fens, and wet meadows. It will not grow in shady areas, and prefers nitrogen-poor soils. It is found in low and subalpine elevations along the BC coast. Its range stretches north into southeastern Alaska, and south into Washington.

Similar Species
Northern gentian is a similar species with purple flowers, and is not a common species on the coast; it is generally found east of the Cascade Mountains.