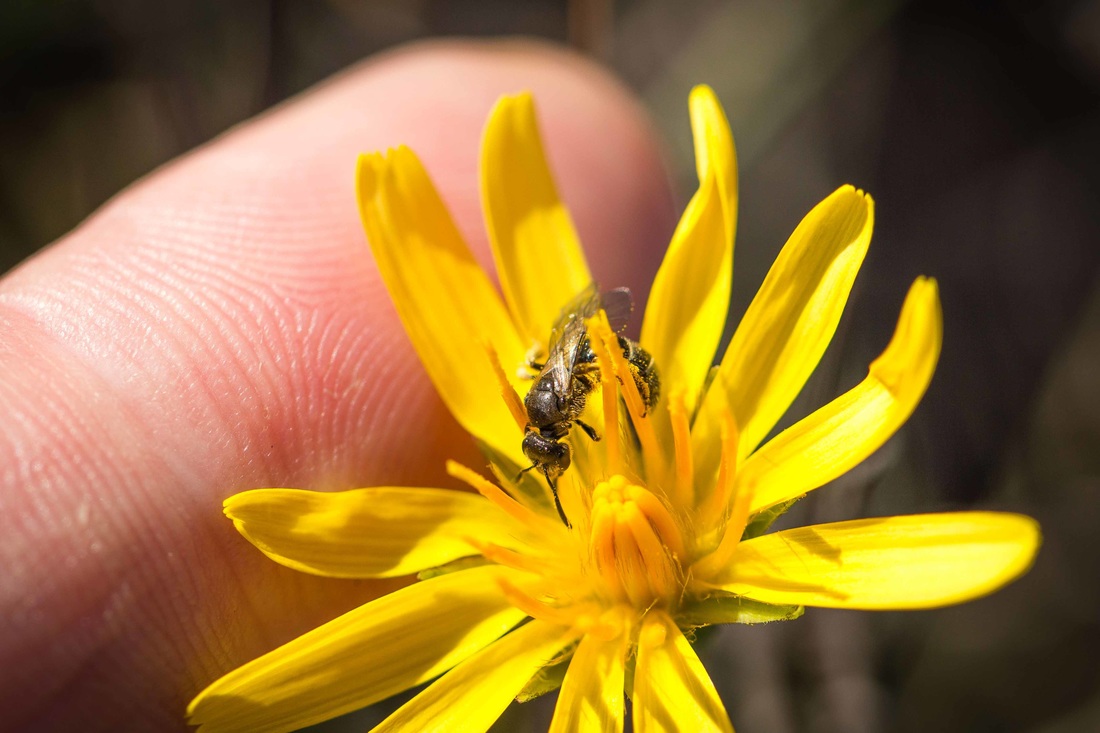 Sweat bee on an apargidium (Microseris borealis) flower. Photos by Josh Silberg.
Identification
​Halictus rubicundus belongs to Family Halictidae — the sweat bees. This sweat bee is black with narrow pale hair bands across its abdomen. These bands occur at the apical ends of the bee's abdominal segments (furthest from the head). The end segments of the legs (apical segments) are somewhat yellowish, all the wing veins are strong and conspicuous, and the head is somewhat wider than it is long. This bee reaches around 1 cm long. Further identification details can be found on the Discover Life species page and in Roberts (1973).

Habitat & Range
This sweat bee is a social species that excavates then nests in burrows in the ground. It is a generalist with regards to the flowers it associates with; click here for a list of flowers it has been recorded visiting. This is a holarctic species found throughout most of North America.

Similar Species
This species can be tricky to distinguish from similar-looking sweat bees found in its range. Other members of its subgenus recorded in BC are Halictus farinosus and H. ligatus. See Roberts (1973) for details. H. tripartitus, belonging to a different Halictus subgenus, is black and banded but with a metallic (often greenish) tinge. Halictus species can be distinguished from Lasioglossum sweat bees by the apical position of their pale abdominal bands (the latter has basal bands).

Intriguing Info
Sweat bees are important pollinators of both wild and agricultural plants.

Sweat bees are named so due to their attraction to the salt in human perspiration; they have a tendency to land on people and lick the salt-containing sweat.