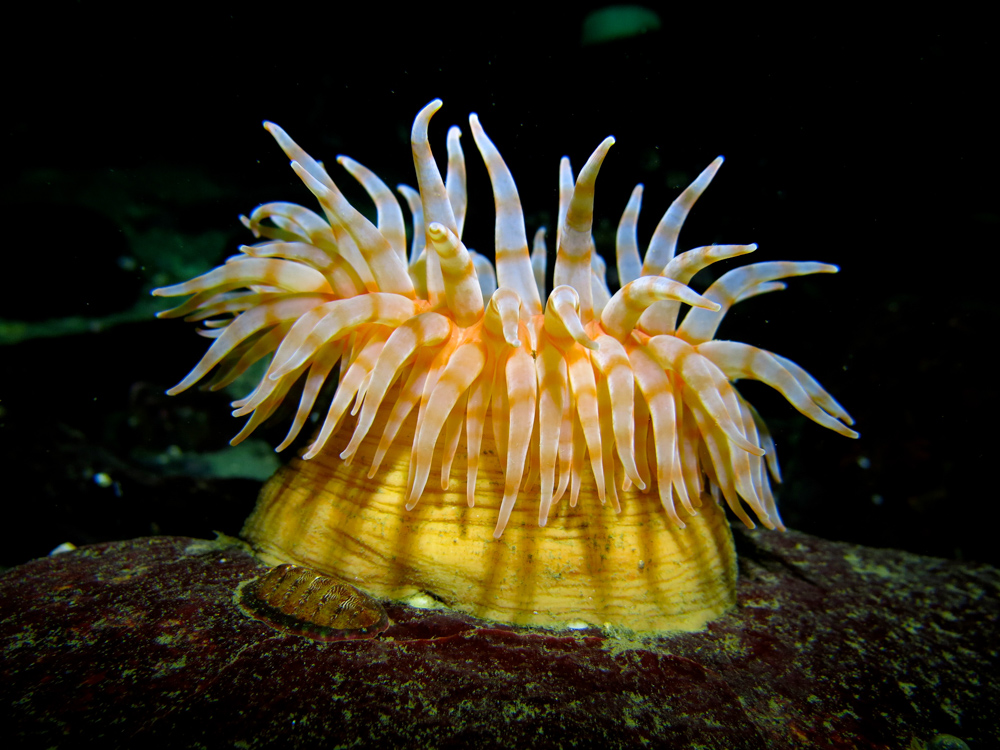 Photo by Jenn Burt
Identification
The column of this squat anemone ranges in colour from bright orange to cream, and may be mottled. Its tentacles are solid white or orange, or are banded with both colours. It reaches 10 cm tall and 12.5 cm across.

Habitat & Range
The swimming anemone is found on rocks as well as sand and gravel bottoms in the subtidal to at least 20 m deep. Reports of its range vary: these reports agree that it is found along coastal BC and Washington. Its range may extend north to Alaska to and south to southern California.

Similar Species
The spotted swimming anemone (Stomphia coccinea) has small white spots dotting its oral disc around its tentacles, and reaches only 3 cm high and in diameter.

Intriguing Info
The swimming anemone is named for its unusual ability to swim away from predators, such as the leather star (Dermasterias imbricata) and other predatory sea stars. When a predators comes into contact, the anemone stretches up, releases its adhesive base, and flexes its body to swim away. A diagram of this process can be seen in the 'Swimming' section of A Snail's Odyssey: Predators & Defenses. While effective, this escape response does not take the anemone too far way from its predator. Watch this response in the video below.
References
Carefoot, T. Stomphia didemon Siebert, 1973. In Klinkenberg, Brian. (Ed.) E-Fauna BC: Electronic Atlas of the Fauna of British Columbia. Lab for Advanced Spatial Analysis, Department of Geography, University of British Columbia, Vancouver. Accessed 08/10/2015.
Harbo, R. M. (1999). Whelks to whales: Coastal marine life of the Pacific Northwest. Madeira Park, BC: Harbour Publishing. P. 49.
Lamb, A., and Hanby, B. (2005). Marine Life of the Pacific Northwest [electronic version]. Madeira Park, BC: Harbour Publishing.