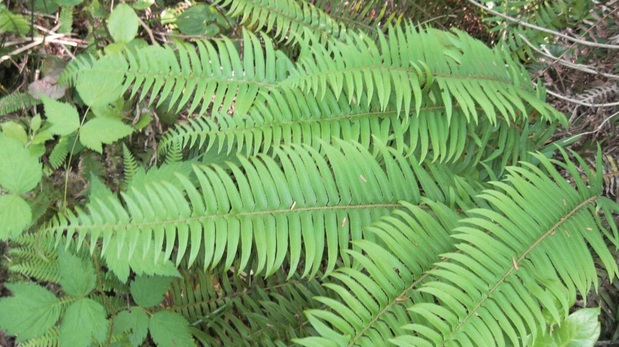 Sword fern on Calvert Island. Photo by Julia Fisher.
Identification
Sword fern is a large, common fern in coastal BC. It is an evergreen that grows up to 1.5 m (~5') tall in the more southern parts of its range. The long blades grow out of a central point, creating a large, erect crown. Each blade has alternating leaflets along the stipe (stem). The distinct leaflets of this species are pointed, toothed, and have a characteristic lobe near their base, giving leaflets a sword-like appearance.  Each leaflet is attached by a small stem, rather than the whole margin of the leaflet.
The lower left photo, above, shows the round sori that form rows on either side of the vein on the underside of each leaflet. Sori house sporangia - structures that produce spores for reproduction. For more on fern reproduction, click here.

Habitat & Range
Sword fern is common in moist forests from low to middle elevations in the southern part of coastal BC. It is less common further north, but does range up to Alaska. It is generally a coastal species, though it is found inland to Idaho, Montana and South Dakota. A disjunct population also exists in Pennsylvania.

Similar Species
Small sword fern can be mistaken for deer fern (Blechnum spicant), but the leaflets of deer fern are attached to the stipe along their entire margin, rather than by a small stem. Deer fern also lack the distinct lobe and toothed margin characteristic of sword fern leaflets.
There are other similar Polystichum species that may overlap in range, incuding the narrow-leaved sword fern (P. imbricans), which is generally found in drier habitats than sword fern.

Human Uses
Sword fern was used extensively by many of the Indigenous Peoples of the Pacific Northwest, mostly in traditional pit cook ovens. The blades went over the hot rocks in the bottom of the pit, and often formed multiple layers within the pit oven. Some First Nations do not use sword fern in this way, as it has spiritual importance.
There were numerous other ways the large, flat blades were used by Indigenous Peoples, including in storage boxes and baskets, on berry-drying racks, and as flooring and bedding.
The plant was not generally eaten, but the rhizomes could be dug up, roasted or steamed, and peeled for use as a starvation food in the spring. The Quileute, Makah, Klallam, Squamish, Sechelt, Nuu-chah-nuulth, Kwakwaka-wakw and Haida all used the rhizomes in this way.
Sword fern was also used in a game called 'pala-pala', and gained the name 'pala-pala plant' in many Vancouver Island and Puget Sound languages.