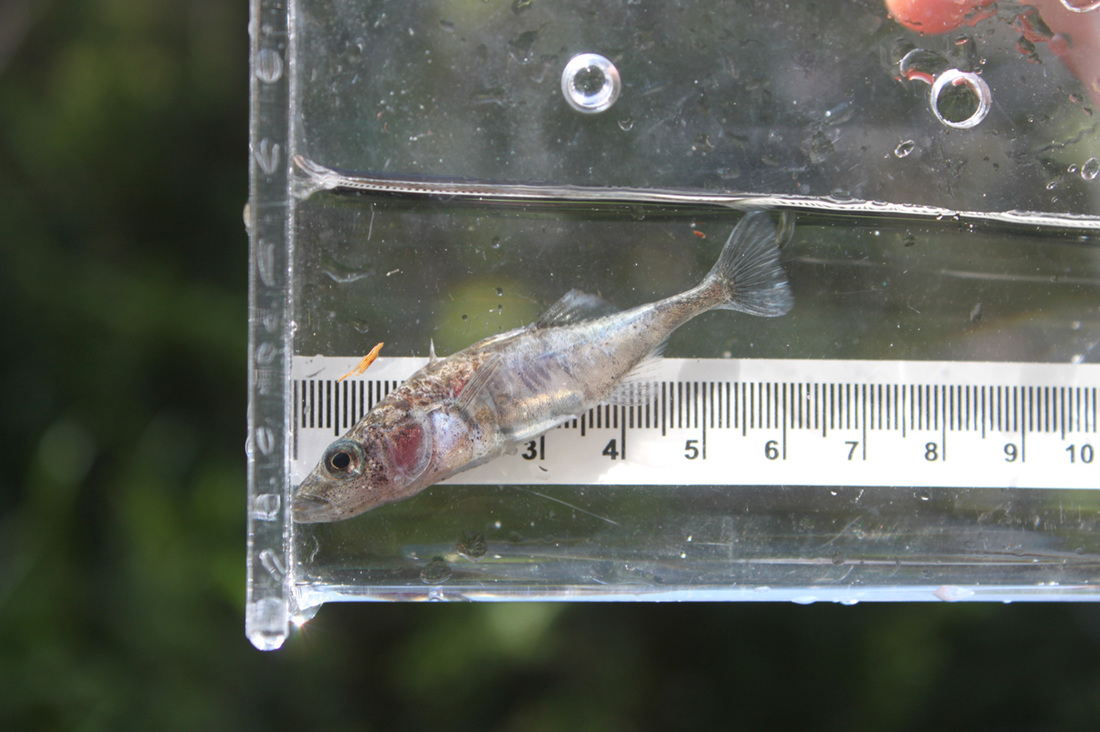 A threespine stickleback caught in Big Spring Creek on Calvert Island. Photo by Jeff MacAdams.
Identification
This small torpedo-shaped fish can be identified by the typically 3 (ranging from 2 to 4) sharp spines that project from its back in front of its dorsal fin. The third spine is smaller and near the dorsal fin. The spines are not always raised, and so may not be immediately evident. Another spine (anal spine) projects downwards from the belly. Another distinguishing feature of this species is the series of bony plates that is usually present along the sides of the body. The anadromous form of this fish has up to 37 plates on each side. Colouring varies between anadromous and freshwater forms of this species: the former ranges from silvery green to bluish-black, while the latter is brownish or greenish and mottled. Regardless, the sides are usually pale while the belly is white, silvery, or yellow. During spawning season breeding males take on a metallic blue or green sheen, with bright red or orange on the front half of the underside, especially around the breast. This fish gets to 10 cm long.

Habitat & Range
The threespine stickleback is a largely anadromous species, though there are many non-anadromous populations that remain in brackish water or freshwater streams, lakes, and rivers. In freshwater this schooling species is commonly found in shallow, well-vegetated habitats with mud or silt bottoms*. Once anadromous populations move to the sea they are found along coastlines and remain near the surface. Schools of anadromous sticklebacks may be found around docks and pilings. This species may also be found in salt and brackish water tidepools.

This species is found in suitable habitats throughout the northern hemisphere; its western North America range extends from the Bering Sea to Baja California, Mexico.

Intriguing Info
This species is the subject of much scientific study, due to its high degree of morphological, ecological, and behavioural variation. Freshwater populations are thought to have evolved from anadromous populations that became stranded in lakes during the last deglaciation.

* In some lakes in BC the freshwater-only form of this species can either be found in the water column of unproductive (oligotrophic) lakes, or at the bottom of shallow areas of productive (eutrophic) lakes; the first is the limnetic type, the second is the benthic type. A benthic population and a limnetic population can exist within the same lake but not interbreed; these species pairs are sympatric species and fit the definition of biologically distinct species, meaning the name Gasterosteus aculeatus actually represents more than one species. Some of these species pairs are in danger of going extinct, including pairs in Paxton Lake, Vandana Creek, and Enos Lake. Information on more endangered populations is available via the COSEWIC Wildlife Species Search.

Details on BC's threespine stickleback species pairs, and the collapse of one of the pairs, can be found in Taylor et al. (2006).