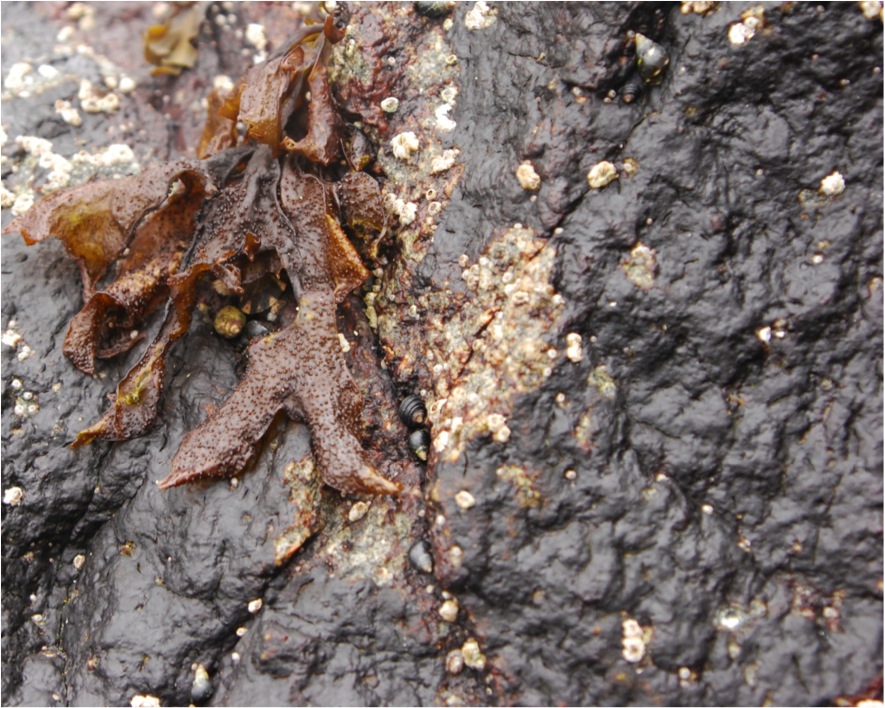 This photo shows both the foliose and crustose forms of Turkish towel. The foliose form that looks more like typical seaweed is female, based on the visible papillae (bumps) on the blades. The dark crust surrounding it is the crustose tetrasporophyte form, and so is neither male nor female. Photo by Joel White.
Identification
Turkish washcloth, not to be confused with Turkish towel (Chondracanthus exasperatus), is a red alga that alternates between a male or female foliose form (gametophyte) and a crustose form (tetrasporophyte). The leafy foliose form is has irregularly or dichotomously branched blades that vary from reddish brown (or nearly black) to yellowish brown. The blades are tough and up to 15 cm long. The blades of female Turkish washcloth are covered in papillae (small bumps) that create a texture similar to a rough washcloth. The crustose form of this species is a thick, opaque, 'tar spot' crust that grows next to the foliose blades. The crustose form is present year-round, while the blades regrow and die back each year.

Habitat & Range
This species is very abundant on rocks in the mid and high intertidal on semi-exposed and semi-protected coastlines. It is one of the most common seaweeds found in the Pacific Northwest, and is found from the Aleutian Islands in Alaska to Baja California in Mexico. It is also found on Japanese and Russian coastlines.

Similar Species
Turkish towel can be confused with other Mastocarpus species, including narrow Turkish washcloth (M. jardinii). The foliose form of this seaweed is much narrower, sometimes has flared blade ends, and is less branched. The crustose form is very similar to that of Turkish washcloth, however. Turkish towel (Chondracanthus exasperatus) is larger, with undivided blades and no crustose form.

Intriguing Info
For many years the crustose form was thought to be an entirely separate genus, Petrocelis, until DNA analysis proved conclusively that both lifeforms are the same genetic material. It had the common name tar spot seaweed.