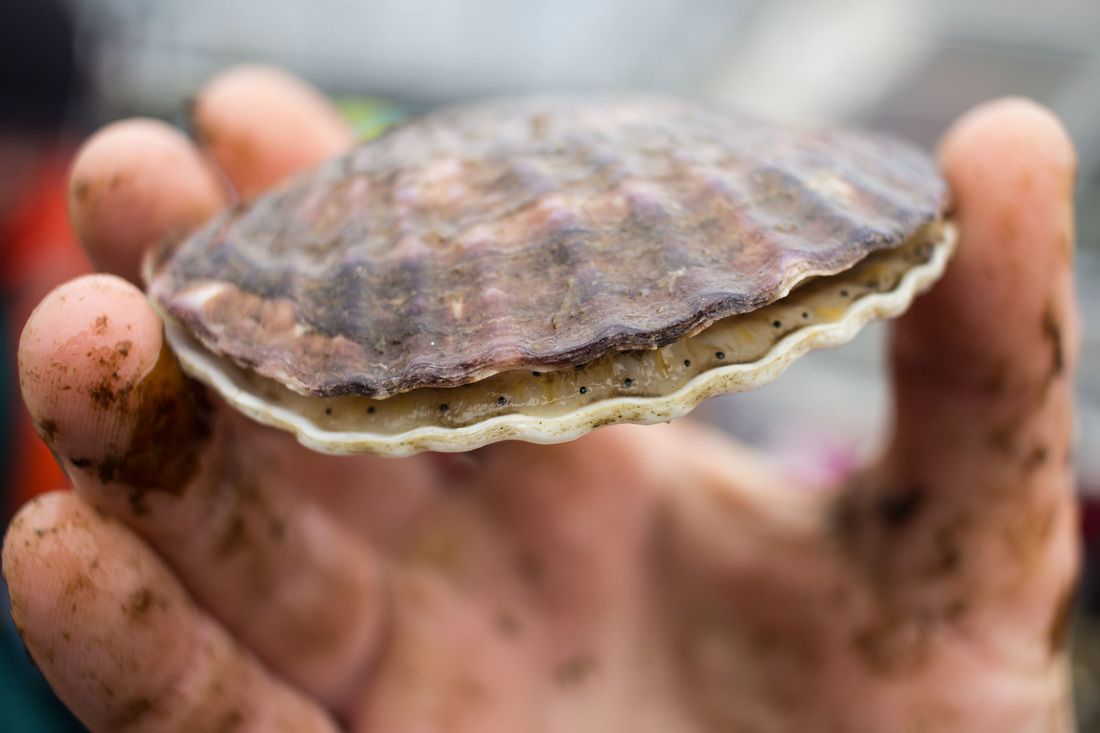 Weathervane scallop photographed by Josh Silberg. The black spots visible just inside the open shell valves are the animal's 'eyes', which are capable of detecting changes in light and motion.
Identification
With a shell diameter of 30 cm, this scallop is the largest in the world — with the rock scallop Crassodoma gigantea at a close second. The weathervane scallop has nearly circular shell valves that differ in colour and ribbing. One valve (the left) is a greyish reddish-pink colour and has around 17 rounded ribs, while the other valve (right) is whitish with around 24 wide, flat, squared ribs. Barnacles and green false jingles (Pododesmus macroschisma) sometimes encrust the shell.

Habitat & Range
The weathervane scallop lives in sand and gravel habitats, where it can be found in small depressions in the sediment from the intertidal to a depth of 300 m. It is more commonly found at the deeper extent of this range. Its distribution extends from northern Alaska to central California: its presence is spotty throughout this range, and it is abundant at a few locations.

Human Uses
This scallop is commercially harvested at the few locations in Alaska and Oregon where it is abundant, though the fisheries are not open every year. It is occasionally harvested at a very small, non-commercial scale on the BC coast, but its low natural abundance makes both commercial wild harvest and commercial farming untenable. Farmed and wild harvest weathervane scallops are rated "Best Choice" options by the Monterey Bay Aquarium's Seafood Watch program. Click here for more information.