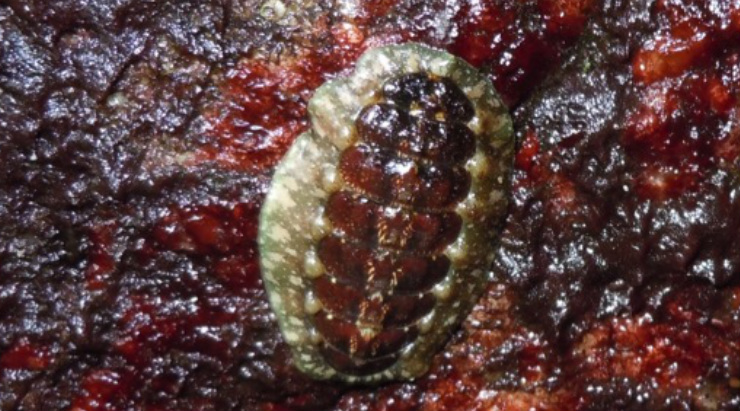 White-line chiton found in a sea cave on an exposed beach. Photo by Becky Segal.
Identification
The plates of this chiton are usually red. Each of the 8 plates has a distinctive central triangle, created by a pattern of narrow, wavy white lines running across it. This pattern may be less distinguishable on the end plates, but is usually clear on plates 2-7. The girdle is smooth and brown, brownish-red, or brownish-green, and is mottled with dull green patches in no particular pattern. White-line chitons reach up to 6 cm long.

Habitat & Range
The white-line chiton inhabits rocky intertidal and subtidal zones to a depth of 52 m. They are not very common overall, but can be locally abundant. While they are generally found on rocks, they will cling to other hard surfaces as well. This species' range extends from Alaska to northern Oregon.

Similar Species
The white-line chiton can be distinguished from the lined chiton (Tonicella lineata) based on differences in colouring. The lined chiton's wavy lines, which are clearest at the sides of the plates, are blue, pink, or other colours, with white sometimes edging the colourful lines. Its girdle has larger, more regular blotches that are usually light yellow or orange rather than green.

Intriguing Info
Groups of small individuals have sometimes been found on floating bottles. This species is preyed on by clingfish. Like all chitons, if dislodged it will roll up into a ball like wood bug to protect itself.