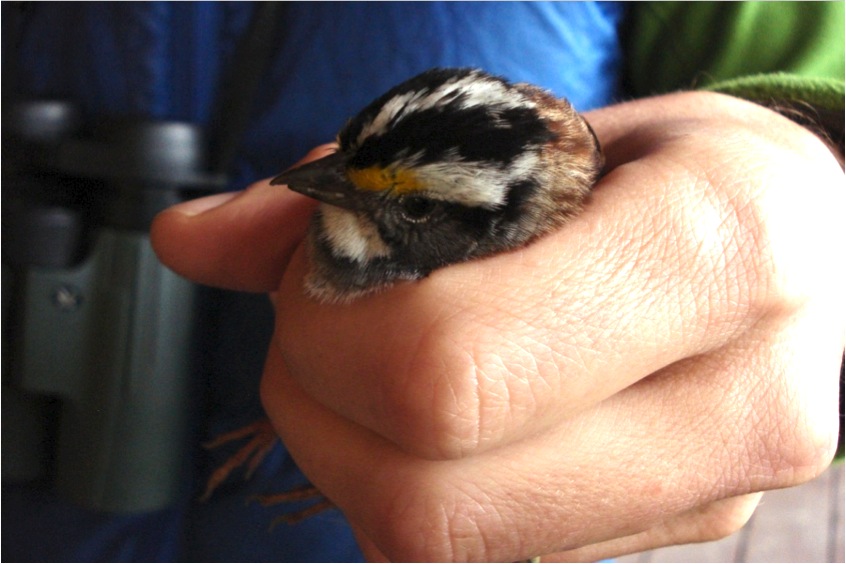 An injured white-throated sparrow found at the Hakai Institute. Photos by Paula Crozier (below left) and Elizabeth Bailey.
Identification
Sparrows can sometimes be tricky to identify, but the distinctive head colouring of the white-throated sparrow makes it one of the more conspicuous species. The top of the head is marked with bold black and white (sometimes tan) stripes, and the throat has a bright and wide white patch. This species has an obvious yellow "lore" - a yellow patch between each eye and the bill. The body colour is brown above and grey underneath. This is one of the larger sparrows, measuring about 17 cm long. The white-throated sparrow has a clear, whistle-like song.

Habitat & Range
Woodlands and forest or thicket edges are ideal habitat for the white-throated sparrow. It can also be found in parks, pond edges, and backyards that offer birdseed. It can often be seen in groups searching for food on the ground and in bushes.This species is not commonly found on the coast of BC; the western extent of its usual range is northeastern BC in the summer breeding months, and the coast of California, Oregon, and Washington (but no further north) in the winter. It is more common in central and eastern Canada in the summer, and the eastern and southern United States in the winter.