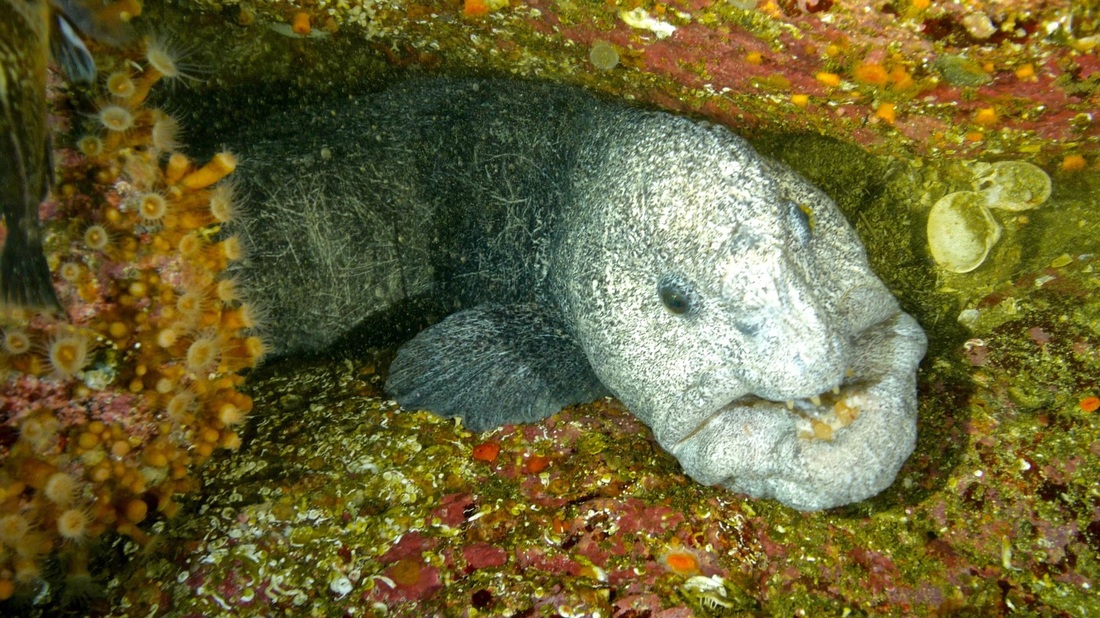 Identification
​The wolf-eel is a distinctive fish unrelated to other 'true' eels; it instead belongs to the wolffish family (Anarhichadidae). Despite not being a true eel, the wolf-eel's common name succinctly sums up its long and narrow body, rather vicious-looking snaggly teeth, and impressive size (it can reach 2.5 m long!) While both male and female have large heads tapering into elongated bodies with long anal and dorsal fins, they are readily differentiated as the female is darker and brownish in colour, while the male is whitish-grey male and has a bumpier, puffier head with a bulging forehead and large jaws. Both are mottled with dark spots surrounded by pale rings, and the degree of mottling tends to increase with size. This species lacks pelvic fins. Juveniles are orange and more conspicuously spotted; this colouring fades as they mature.

Habitat & Range
The wolf-eel is a slow-moving, reclusive fish that hides away near the sea bottom in crevices and caves, often using an individual location as a semi-permanent den. It is found in rocky locations to 226m. Its range extends from Northern Baja California north to the Aleutian Islands, Alaska, and east and south to the Seas of Okhotsk and Japan.

Intriguing Info
This species strong, heavy jaws are perfectly designed for eating crunchy, shelled invertebrates such as sea urchins and crabs, as well as other fish. A bite from the jaws of a wolf eel can cause considerable damage, however the species has a gentle reputation among divers: once coaxed out of its hiding place by the promise of hand-fed food from divers, an individual may readily emerge to greet other divers.

Wolf eels mate for life. Until they hatch, egg masses are constantly protected by one or both parents. Learn more interesting facts about the wolf-eel's life history on the Monterey Bay Aquarium's species page.