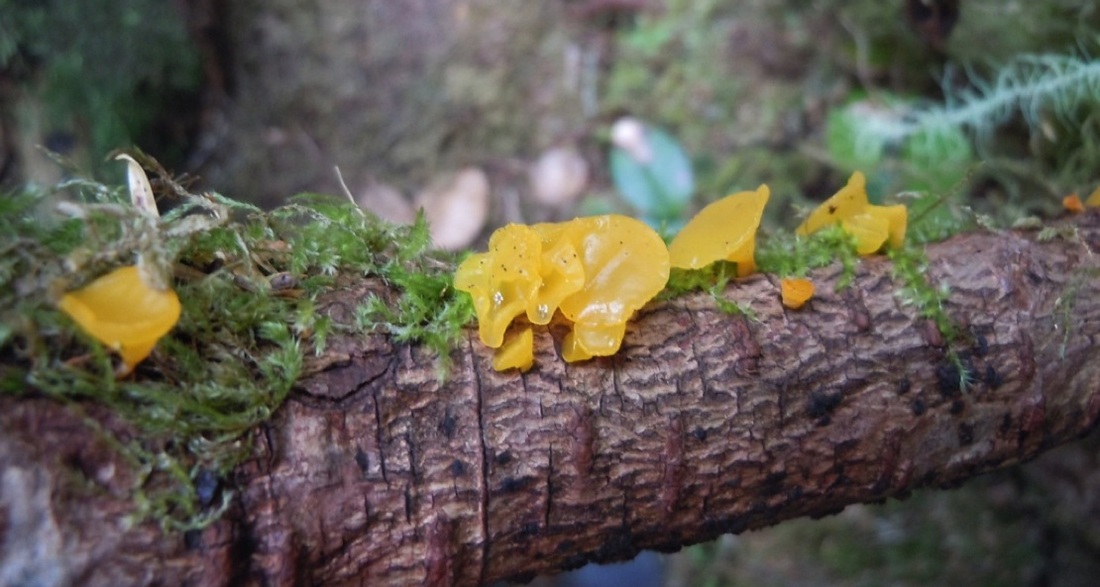 Photos by Rebecca Segal (top) and Julia Fisher.
Identification
This small bright lemon or golden yellow fungus is saucer-shaped to shallowly cup-shaped (concave). The disc gets to just 0.3 cm in diameter and tapers to a narrower base, sometimes with a short stalk. The underside of the disc is smooth and lighter in colour than the top. See the E-Flora BC species page for more detailed (and microscopic) identification information.

Habitat & Range
Dense clusters of yellow fairy cups can be found growing on decaying wood of both coniferous and deciduous trees in the summer and fall; this species may also be visible year-round in warmer locations. It is found throughout North America. Other recorded locations include New Zealand, Greenland, the United Kingdom, and other areas of Norther Europe.

Similar Species
Golden jelly cone (Heterotextus alpinus) can also be cup-shaped, but can be distinguished from yellow fairy cups by its ribbed, bumpy underside and definite jelly texture. Heterotextus luteus, another cup-shaped jelly cone species, can also be differentiated by its jelly texture.
Hymenoscyphus calyculus can be lemon yellow, but as its presence in North American is uncertain confusion with Bisporella citrina is unlikely. It is recorded in Europe, where it is still less common than Bisporella citrina.