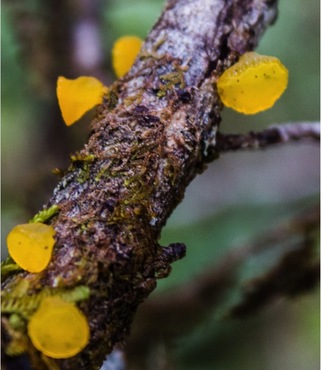 Photo by Cody Gold
Identification
The fruitbody of this golden yellow to orange jelly fungus is gelatinous, cup-shaped (concave) to top-shaped (convex), 0.3-1 cm in diameter and roughly the same height, with a short central stem.The top surface is smooth or almost smooth, while the underside is ribbed with grooves and roughened by small bumps. When dried this species turns dark orange-red. More detailed identification information can be found on the E-Flora BC species page.

Habitat & Range
Golden jelly cone is found growing scattered or in clusters on decaying coniferous logs, branches, twigs, and stumps. It is most commonly seen in spring. Its west coast range extends from BC to California; it is also reported in other areas of North America, as well as South America and the United Kingdom.

Similar Species
Yellow fairy cups (Bisporella citrina) are cup- to plate-shaped and lemon yellow; they can be distinguished from cup-shaped golden jelly cone individuals by their smooth underside as compared to the ribbed, bumpy underside of golden gone jelly. The latter also has a definite jelly texture, whereas that of yellow fairy cups is smooth and not jelly-like. Heterotextus luteus is very similar to golden jelly cone; while it is generally smaller and does not have the same ribbed underside, a positive identification of either species may require an examination of microstructures. See the Pileate Jelly Fungi of the Pacific Northwest field key for this information.