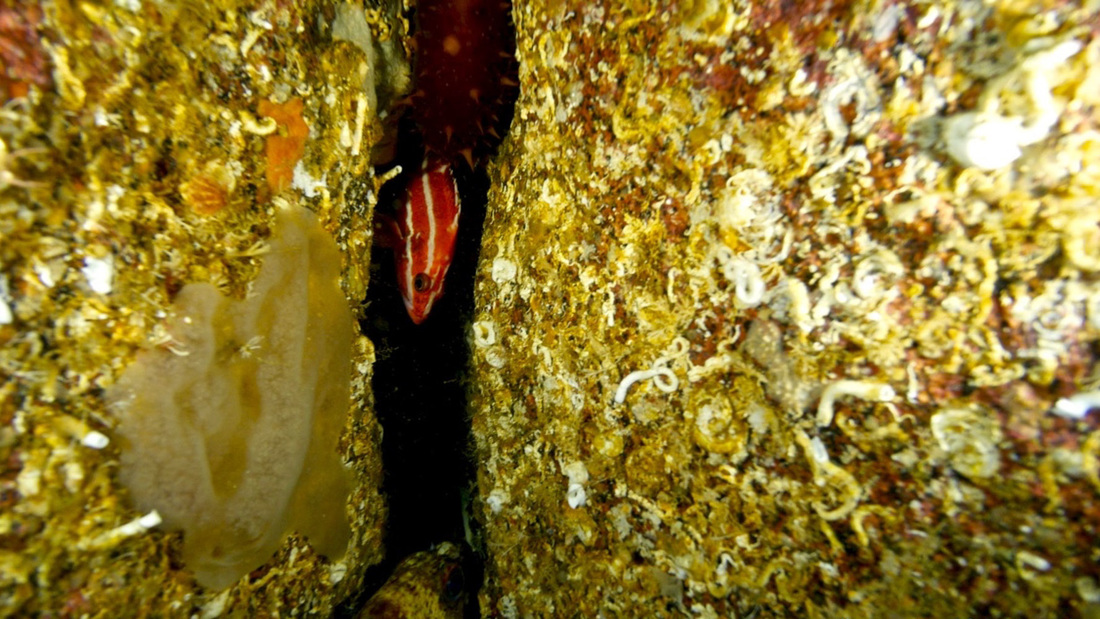 Juvenile yelloweye rockfish photographed by Tristan Blaine.
Identification
The yelloweye rockfish is yellowish-orange to reddish-orange with a light or white stripe along each lateral line. The more bold-coloured juveniles have two bright white stripes along each side — the one on the lateral line that they maintain into adulthood, and a shorter one below.  As per its name, this species has distinctive bright yellow eyes, above which are spines (one above each eye socket) as well as somewhat eyebrow-like ridges. At a maximum length of 91 cm long, this is one of the largest rockfish species.

Habitat & Range
This species tends to be solitary, and are often found near the sea bottom near shelter provided by rocky reefs, or hiding in crevices. The most common depth range for this species is 300-600 m, but it may be found in shallower water (to 15 m). Juveniles are more commonly seen by divers, as they tend to inhabit shallower rocky reefs. The range of the yelloweye rockfish extends from the Gulf of Alaska to Baja California, Mexico.

Intriguing Info
This species can live for more than 100 years. Females can produce as many as 2, 700, 000 eggs, though relatively few of these eggs make it to adulthood.

Human Uses
​This species was once discarded as non-valuable bycatch, but is now highly valued and harvested both by recreational anglers as well as commercially with other rockfish. It commonly called red snapper, Pacific red snapper, and red rock cod when sold in markets and restaurants. Adults, particularly large older adult females, have been overharvested in much of the Pacific Northwest. The yelloweye rockfish is designated as as a species of Special Concern by the Committee on the Status of Endangered Wildlife in Canada (COSEWIC), and is listed as such by the Species At Risk Act (SARA). This is because of life history traits such as its slow development to maturity, long lifespan, and low survival rate after being caught and released. See the 2008 COSEWIC Assessment and Status Report for more information.

​Concerns about rockfish population levels have led to the creation of Rockfish Conservation Areas (RCAs) in inshore locations along the BC coast. See the Living Oceans Society map of RCAs and Fisheries and Oceans Canada for more information on these areas.