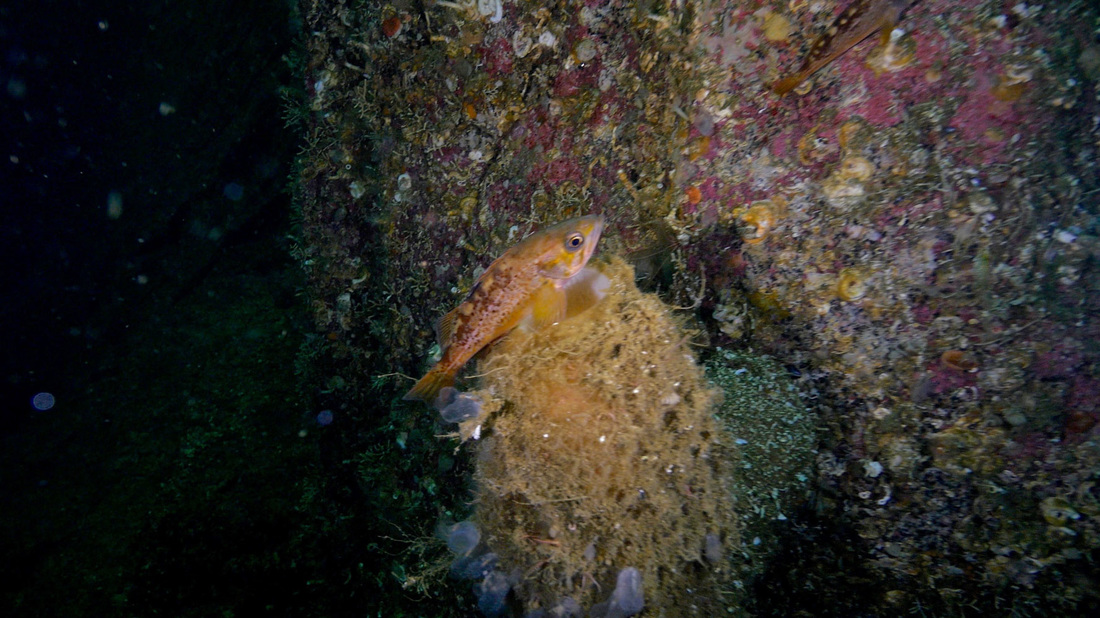 Juvenile yellowtail rockfish on a boot sponge. Note the dark spot on the dorsal fin. Photo by Tristan Blaine.
Identification
The yellowtail rockfish is a yellowish to olive-green or greenish-brown fish; its fins are particularly yellow, though the ventral fins may be more orange-tinged. The colouring along its back is darker and somewhat mottled, transitioning to lighter sides and a somewhat whitish belly. Juveniles are lighter and brighter in colour, and have a large black spot on their dorsal fin. This species reaches 66 cm long.

Habitat & Range
This species may be found schooling near the surface with other rockfish species in open water, around rocky reefs, and along steeply-sloped shorelines. Individuals also shelter in crevices. Juveniles may be spotted around pilings and floats. This is an active species that may be seen splashing at the surface when chasing prey. It is found in the intertidal and subtidal to 549 m, from the Aleutian Islands, Alaska to southern California.

Similar Species
The most similar species found along the Central Coast are the black rockfish (Sebastes melanops), which has the same darker mottled back transitioning into lighter sides and a whitish belly. The yellow "wash" of the yellowtail rockfish, giving it its yellowish or greenish tinge, should be noticeable however and should prevent confusion. The widow rockfish (S. entomelas) is brownish but can be flecked with yellow; it lacks the yellowish fins, however. The dark dusky rockfish (S. ciliatus) and the light dusky rockfish (S. variabilis) also lack the yellowish-tinged body and fins, and are more uniform in colour.

Human Uses
This species is harvested by both recreational and commercial fishing. It is targeted with other rockfish in multi-species commercial fisheries. Some commercial harvesting methods are less sustainable than others: see the Recommended and Not Recommended fisheries on the Ocean Wise website for more information.

​Concerns about rockfish population levels have led to the creation of Rockfish Conservation Areas (RCAs) in inshore locations along the BC coast. See the Living Oceans Society map of RCAs and Fisheries and Oceans Canada for more information on these areas.