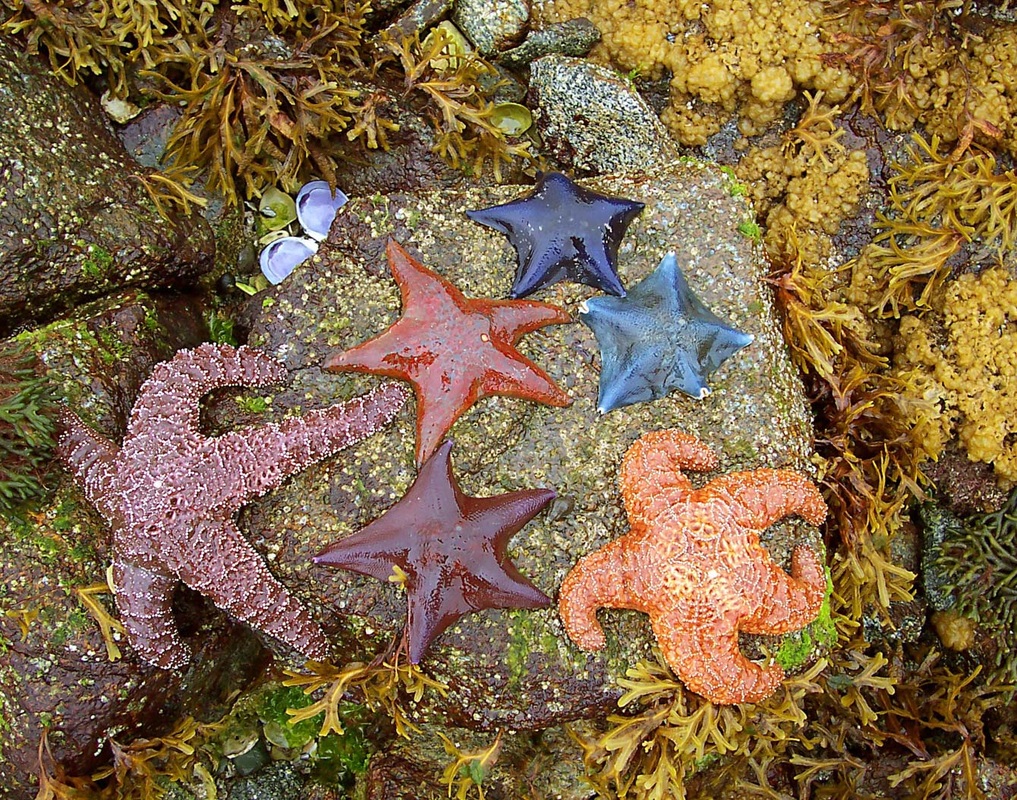 Three bat stars (two blue ones and a dark reddish-purple one at centre bottom) along with a leather star (reddish-orange, at centre) and two ochre stars (larger, left and right). Photo by Todd Carnahan.
Identification
The bat star has a distinctive "webbed-foot appearance" due to the depression of thin tissue between the thick, raised centres of its broad arms. It usually has 5 or 6 arms, though it can have as few as 3 or as many as 8 (click here for an image of one with 7 arms. The width of the central disc is much greater than the length of the arms. It varies greatly in colour: it can be red, orange, brown, yellow, blue, pink, green, and shades in between. It can also be one solid colour or patterned. Its exposed (aboral) surface is made rough and granular by a layer of flat crescent-shaped ossicles (visible in this image). This sea star gets to 25 cm across.

Habitat & Range
This common species is found along exposed coastlines but not in areas directly exposed to surf, on rock as well as broken shells, sand, and mud. It can be very abundant in suitable habitat, especially in shallow exposed bays. It inhabits the intertidal and subtidal to 300 m deep, from southern Alaska to the Gulf of California, Mexico, though it is uncommon in Washington and Oregon.

Similar Species
The leather star (Dermasterias imbricata) has a smooth surface, somewhat narrower arms and less of a webbed-foot appearance, and is coloured with a patchwork of reddish-brown and greyish-purple.