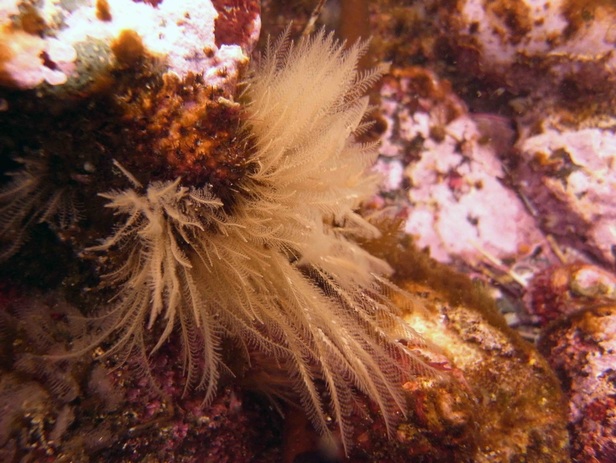 Photo by Jenn Burt
Identification
This feathery hydroid colony reaches 15 cm tall. The main stems are unbranched and bear small, light-coloured globules. These globules are amphora-shaped (oval, narrowing into a tubular neck) reproductive polyps. The feeding polyps attach directly to the side-branches along just one side. The numerous side branches occur in the same plane, meaning the colony has a flattened structure.
​
Habitat & Range
Glassy plume anemone attaches to kelp stipes and holdfasts, rocks, and floats in the intertidal and subtidal to 133 m deep. In the Eastern Pacific its range extends from southern Alaska to northern Mexico; it is found in other oceans around the world as well.

Similar Species
Other feather-like hydroids are Aglaophenia spp. (larger) and Abietenaria inconstans (feeding polyps occur on both sides of branches).