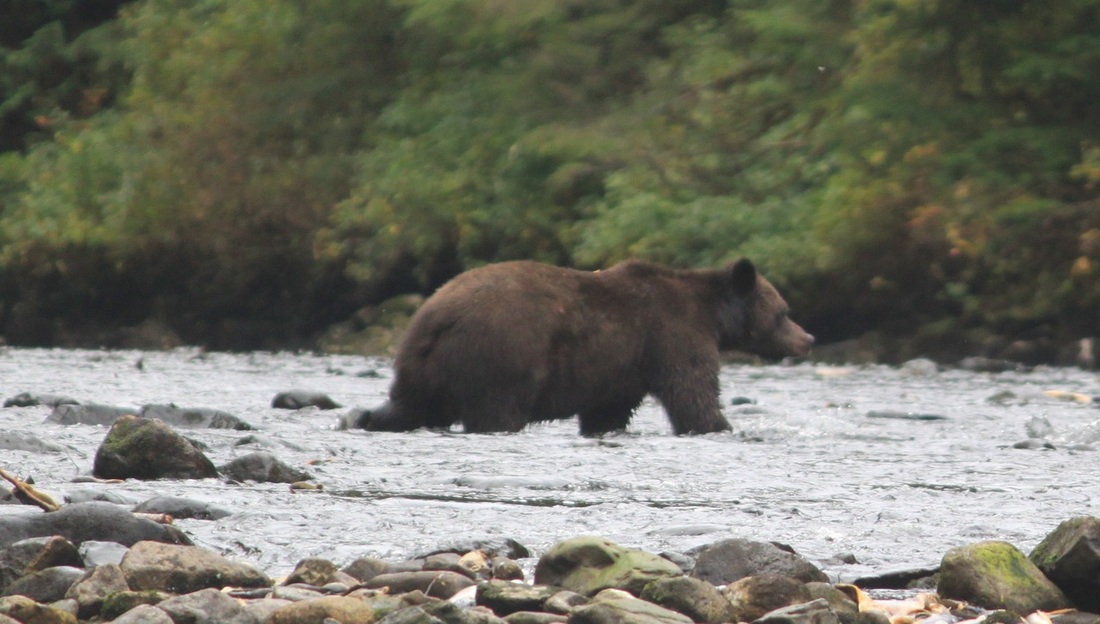 Top: grizzly bear in the upper reaches of the Koeye River; photo by Morgan Hocking. Bottom left: a grizzly at a rub site; photo by Chis Darimont (raincoast.org). Biologists use rub sites to gather hair samples, which can provide important genetic and dietary information.  Bottom right: grizzly prints; photo by Kelsey Collins.
More grizzly bear photos
Identification
Grizzly bears were once classified as Ursos arctos horribilis, one of over 200 brown bear subspecies which are now mostly identified as simply Ursus arctos. These large predators are identified by the large hump between their shoulders. They have thick fur that is usually brown, but can vary from dark blonde to black. Grizzlies often have a ruff of longer hair around their neck. They have a fairly distinctive face shape: a rounded head, small eyes, and a concave face from which the snout juts out at an abrupt angle. They are stocky in build, with thick legs and large, wide feet bearing long claws. Males can be up to twice the size of females, ranging from 1.5 to over 2.5 m long, and 70-330 kg. Females range in size from less than 1.5 to nearly 2 m long, and 60-175 kg. Individuals on the coast tend to be larger than those found in the northern interior of BC.

Read more about grizzly bear identification and biology on ARKive.org.

Habitat & Range
This species once inhabited a wide variety of climates worldwide, but is now mostly found in the "northern strongholds" of Russia, northern and western Canada, and Alaska. Some small populations still exist in areas of southern and eastern Europe, the Middle East, and central and eastern Asia. Grizzlies have been recorded throughout most of BC  except for the southern urban areas, Haida Gwaii, and Vancouver Island. They are more common in remote areas along the Central and North Coasts and northern interior of the province.
BC's grizzlies are found in both mountainous and low-level habitats. They inhabit forested and open areas, and coastal grizzlies are often found around streams, rivers, and lakes during the salmon spawning season.

Read more about the global and North American distributions on ARKive.org and E-Fauna.

Similar Species
Black bears also vary in colour from dark blonde to black, and so colour should not be the only identifying feature used to distinguish between the two species. Adult grizzlies are usually much bigger than adult black bears, but small or juvenile grizzlies may appear black bear-like. Look for the hump between the shoulders and the ear size - black bear ears are larger and more prominent. Grizzlies also often have a ruff of longer neck hairs. The front claws are much longer on grizzlies as well - you likely won't want to be so close as to actually see the longer claws in person, but this may help to identify tracks.

Human Uses
Grizzly bears are a major target for both trophy hunters and BC's ecotourism operations - two endeavours that are clearly at odds. While the trophy hunt of grizzlies brings up some obvious ethical issues, it also is a conservation issue as grizzlies are already facing numerous other anthropogenic  threats (see Conservation below). Some environmental organizations and First Nations groups are actively campaigning to end the trophy hunt in BC, which occurs for two months each spring and fall. In September 2012 the Kitasoo First Nation began banning the trophy hunt from their traditional territory, and continued the ban in 2013. This is a contentious issue, as the provincial government maintains that it has jurisdiction over the provincially-sanctioned hunt. The environmental organization Raincoast Conservation Foundation has dealt with this issue by buying hunting licenses to areas previously used by trophy hunting outfitters. As of summer 2013 the organization has purchased two hunting licenses that cover large areas of the Central and North Coasts, and are looking to buy land to the north and south of these areas.

• Read more about issues surrounding the trophy hunt on the Raincoast and Pacific Wild websites.
• Read about the ethics of the trophy hunt in the online book Faltering Light II (the preview shows the whole book), and in the following journal article:
Gunn, A.S. 2001. Environmental Ethics and trophy hunting. Ethics & the Environment 6: 68-95

Intriguing Info
Grizzly bears can run fast - they have been recorded at speeds of up to 64 kilometres per hour (40 miles per hour)!
Where salmon is available it usually becomes the most important food source for coastal grizzlies as it allows them to greatly increase their winter fat stores. Access to this high-quality, energy-rich resource has key impacts at both individual and population levels: grizzlies that feed on salmon tend to be larger, have more cubs, and are found in denser populations.

This bear-salmon interaction goes on to have further impacts on the surrounding ecosystem. Once grizzlies catch a salmon they take their catch away from the stream, where the salmon is consumed and the remains are spread around the surrounding area by other scavengers. The nutrients from these salmon feed nearby plants as well as other animals and insects, and affect which plant species grow in the area. See Salmon for Terrestrial Protected Areas and Impacts of Salmon on Riparian Plant Diversity and  for further information. Also take a look at the following short BBC films:
Conservation: Grizzly bears are a blue-listed species in BC, meaning they are of special concern. They are also listed as a species of special concern by the Committee on the Status of Endangered Wildlife in Canada (COSEWIC). As of July 2012 the species listing under the federal Species At Risk Act appeared to be in progress.

Their poor condition in some parts of the range, combined with their naturally low reproductive rates and increasing pressures of resource extraction and cumulative impacts in currently intact parts of the range, heighten concern for this species if such pressures are not successfully reversed (COSEWIC, 2012).

Grizzly bears once were found all along the west coast of North America from Alaska to California, as well as other areas throughout North America and around the world. This coastal range has been reduced to Alaska and the Central and North Coasts of BC. Some do still exist in southern BC, but this number is rapidly shrinking, and the southern extent of the remaining range is creeping northward. Major threats include:

• loss of habitat due to urbanization, logging, and fragmentation
• trophy hunting
• contaminants from the large amount of contaminated salmon in their diet (coastal grizzlies)
• and decreasing number of salmon, a major food source for coastal grizzlies.

As the salmon-bear interaction is so important to the surrounding ecosystem, decreased salmon availability is an issue not just for bear populations but for the entire coastal BC environment. This potentially puts the ecosystem at odds with human fisheries. Proposed solutions include protection of stocks important to terrestrial protected areas, and allocating allowed fishery catches based on the principles of Ecosystem-Based Fisheries Management (EBFM). See Salmon for terrestrial protected areas and Using Grizzly Bears to Assess Harvest-Ecosystem Tradeoffs in Salmon Fisheries for further information on these concepts.

See the following links for more information on the status of grizzly bears in coastal BC and the threats they face:
• COSEWIC Assessment and Update Status Report (2002)
• Raincoast Conservation Foundation
• Pacific Wild