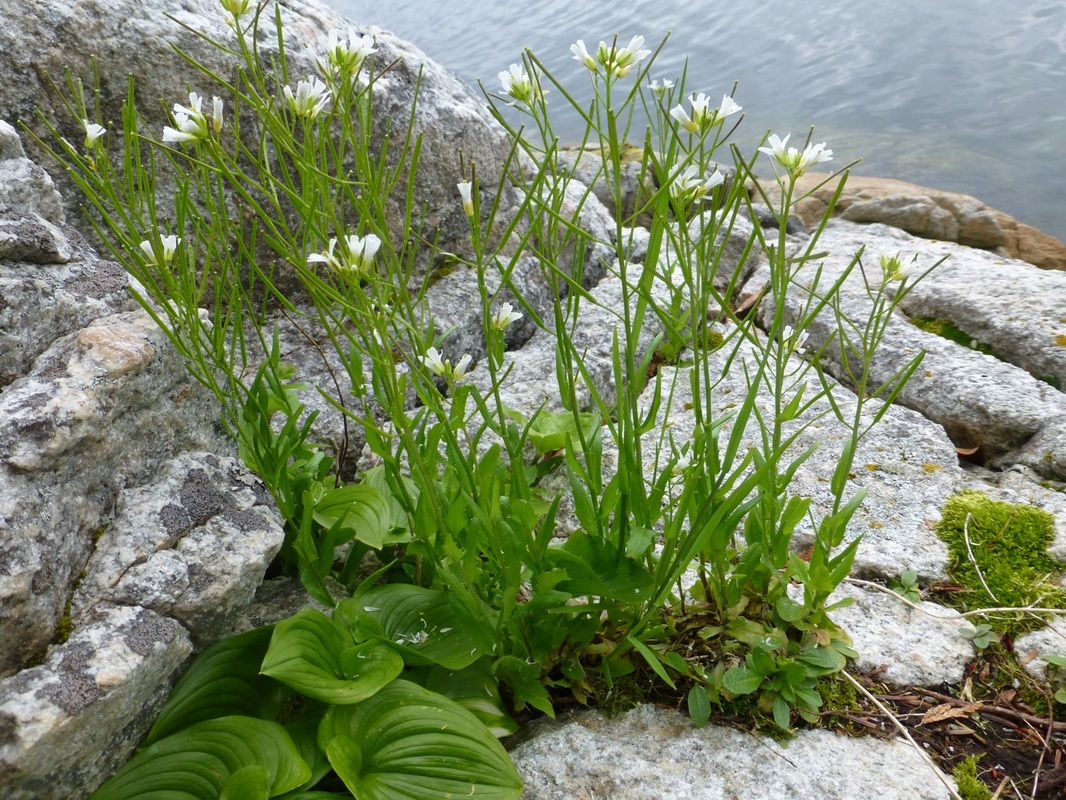 Identification
Hairy rockcress is a flowering biennial or short-lived perennial with small white to pinkish-white flowers. These flowers form clusters atop an unbranched stem that reaches 1 m tall. The plant has approximately lance-shaped stem and basal leaves. The alternating stem leaves clasp the stem and are toothed; the basal leaves are hairy and may be purple beneath.

Habitat & Range
Hairy rockcress can be found in open habitats like meadows, bluffs, beaches, rocky slopes, and disturbed areas, from low to middle elevations. It is common in and west of the Coast-Cascade Mountains. Its range extends north to Alaska and Yukon Territory and south to Oregon and Idaho.

Similar Species
Lyre-leaved rockcress (Arabidopsis lyrata) has hairless spoon-shaped basal leaves. Holboell's rockcress (Arabis holboellii) has white to pink or purple flowers, and is not found further north than southern Vancouver Island and the Gulf Islands in southern BC.

Intriguing Info
Rockcress plants play an interesting role in the dispersal of some rust fungi species in the genus Puccinia. The rust causes the infected host plant to form flower-like clusters of leaves ('pseudoflowers') atop its stem, instead of the usual basal rosette of leaves. The infected pseudoflowers are bright yellow and covered in fungal gametes. The rust secretes a sweet-smelling, sticky substance which, together with the colour and shape of the pseudoflowers, attracts insect pollinators. Fungal gametes stick to the pollinators, who facilitate cross-pollination and increase the chances of successful reproduction by visiting multiple pseudoflowers. See 'Fungus Is a Flowerlike Con Artist' for more information.