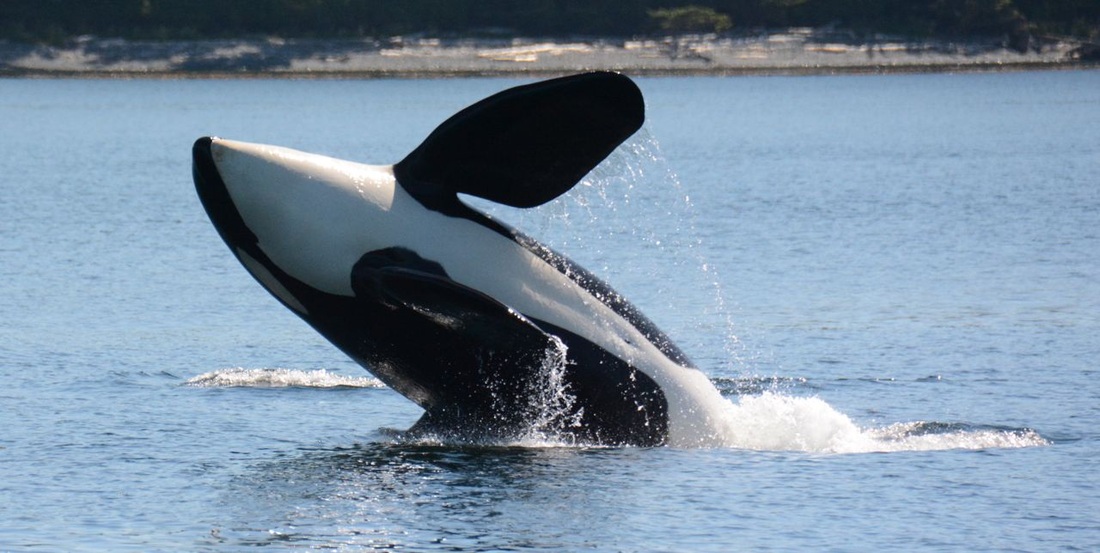 Top: an orca surfaces in the waters between Calvert Island and Koeye River, photo by an ES 470 participant. Bottom: breaching orca, photo by Alison Ogilve.
Identification
The distinctive white, black, and grey colouring of orcas makes them hard to mis-identify. They have a black back and sides, with a white front that merges with white side patches. Behind their eyes are large white elliptical patches, and they have a grey saddle patch directly behind their dorsal fin. Females get up to 7 m (23') long and 8 metric tonnes (8 tons). Males can reach 9 m (30') and 10 metric tonnes (11 tons). In addition to their larger size, males tend to have taller and more upright dorsal fins; those of females are smaller and more angled or curved.

There are three main groups of orcas found in coastal BC waters: resident, transient, and offshore. Offshore are rarely seen and little is known about them, so you are more likely to come across a resident or a transient. These two groups can usually be differentiated by the shape of their dorsal fin. Resident dorsal fins are generally more rounded and backward-curved at the top, while transient dorsal fins are shaped almost like an isosceles triangle, with a very slight curve at the very top. Fin shape does vary between individuals, however, enough that individual whales can be identified by the shape of their fin, along with any nicks and scars they may have. Such identification has allowed researchers to track the well-being of individuals.

Habitat & Range
The orca is one of the most iconic animals of the Pacific Northwest as these coastal waters have the largest populations of this species. However its range actually covers all oceans around the world including tropical and arctic waters; this is one of the largest ranges of all mammals. They are most common in colder waters such as around the Pacific Northwest, Iceland, Norway, Japan, the Bering Sea, and Antarctica. Their distribution appears to be based on prey availability, and does not seem to be affected by salinity, turbidity, temperature, or distance from shore.

Similar Species
Orcas are fairly easy to identify, but from a distance smaller females or juveniles may appear similar to Risso's dolphin, the false killer whale, or Dall's porpoise. A correct identification shouldn't be too much trouble upon closer or longer observation.

Human Uses
Killer whales are wonderful to watch, and their breaching, tail- and fin-slapping, and spyhopping behaviours make them key targets for whale watching groups. While it is tempting to get as close as you can to see these displays, care and caution must be taken while whale watching. Canada's whale watching guidelines can be read on this website. Of particular importance is the mandatory guideline that boats stay a minimum of 100 m from the animal with motors off, or in neutral or idle. This was once a voluntary guideline that few followed, and is now mandatory.

Intriguing Info
There are some key differences in the lifestyles of resident and transient killer whales. Residents eat mostly fish, particularly Chinook salmon, and stay together in matriarchal family groups of pods and subpods of 5-50 individuals. Transients eat marine mammals, including seals, sea lions, and porpoises, and travel in small groups of 2-4 individuals that may or may not be related.

Different pods have different dialects, and residents tend to be more vocal than transients. Listen to killer whale vocalizations

​The black and white colouring of a killer whale is called disruptive colouration. It helps the animal blend in against moving, sun-dappled water, making it hard for prey to spot them.

Conservation: BC's killer whales are facing a variety of anthropogenic threats, including physical and acoustic disturbance from motorized boats, competition for prey such as salmon, and contaminants. Research by Canada's former marine toxicologist, Dr. Peter Ross, showed that BC's killer whales are some of the most contaminated animals on the planet. The high levels of PCBs and other toxins found in southern residents are from the huge amount of salmon they eat, which tells us something about the health of the Pacific Ocean.

The southern resident populations is listed as endangered by COSEWIC, and the northern residents, west coast transients, and offshore populations are listed as threatened. They are all red-listed in BC. Read more about the threats facing BC's killer whales on the SARA species profile and the COSEWIC species assessment.