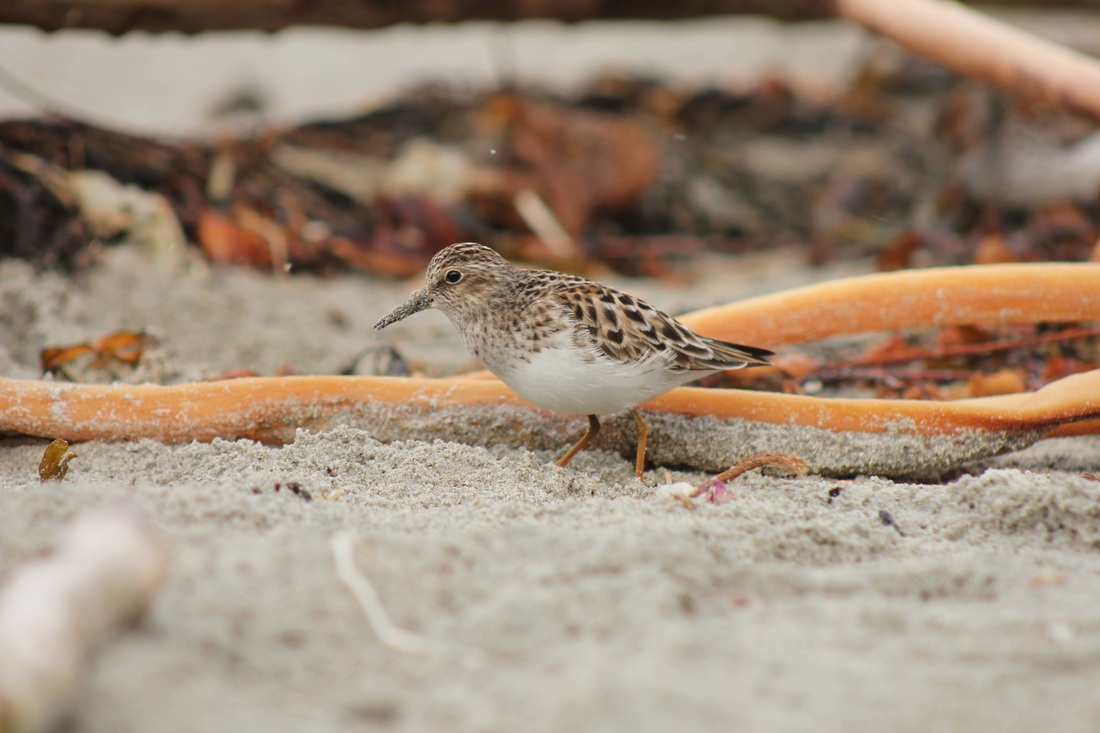 Photo by Ian Thomas
Identification
At a maximum of 15 cm long this tiny shorebird is the smallest of the "peeps" — small sandpipers that can be difficult to differentiate. Its main identifying features are yellowish legs and a black bill, which is relatively short and thin, and curves slightly downward. It has a round body and short, pointed wings. Its plumage, which remains fairly similar year-round, is streaked brown above and and white below.
​
Habitat & Range
The least sandpiper can be found along water body edges, particularly more inland habitats such as ponds, rivers, and marshes. Along the coast it prefers the shelter of mudflats and estuaries over more open ocean shorelines, though it may still be found on tidal flats, rocky shorelines, and sandy beaches. This species is found along the Central Coast during its migration between breeding grounds in Alaska and northern Canada, and its winter range which extends from the southern United States, Mexico to northern South America. Its northern nesting sites are situated in wet tundra, bogs, sedge meadows, and boreal forest.

Similar Species
The western sandpiper (Calidris mauri) and the semipalmated sandpiper (Calidris pusilla) both have black legs and are a bit larger. If the leg colour is obscured from view, both can be differentiated in winter by their more greyish-brown upper plumage. The western sandpiper can be identified in summer by rusty-red patches on its wings (scapulars) and head as well as dark arrow-shaped spots along its sides. The semipalmated sandpiper's summer breeding plumage is quite similar to that of the least sandpiper; if legs are obscured, bill length and shape could be used for identification as the former has a thicker, straighter, and longer bill.

Intriguing Info
This is the smallest shorebird in the world. It can be found in mixed flocks with other sandpipers and shorebirds during fall migration and winter, though it more commonly occurs in smaller flocks than other sandpipers, with birds numbering in the dozens.