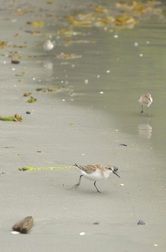 Photo by Kelly Fretwell.
Identification
The western sandpiper is a small sandpiper (to 17 cm long) with black legs and a slightly drooping black bill. It has a fairly distinctive rusty red tinge on its crown, behind its eyes, and on its back and scapulars during the breeding season, as well as black arrow-shaped spots along its sides. The red mostly disappears from its winter plumage, and is replaced with a dull grey-brown head and back. Both breeding and non-breeding plumages have some head, neck, and back streaking, though non-breeding less so.

Habitat & Range
The western sandpiper can be found in wet habitats such as shorelines, mudflats, wet meadows, lakes, and ponds. It breeds in northwestern Alaska and winters along most of the east and west coasts of the United States as well as inland areas of the southern US and Mexico; its winter range also extends south into coastal areas of South America. During migration it can be found all along the west coast of North America and throughout the United States. While this species is present in the most southern areas of the BC coast during the winter, it is only present on the Central Coast during migration. The western sandpiper is one of the most common shorebird in North America, despite its relatively small breeding range.

Similar Species
The breeding plumage of the semipalmated sandpiper (C. pusilla) is ver similar to that of the western sandpiper; its head and back are only slight tinged with red, and the black spots don't extend as far along its sides. Its bill is usually shorter and is less drooped at the tip. It is not a common visitor on the west coast of BC during migration. The least sandpiper (Calidris minutilla) is smaller, has greenish-yellow legs, and its breeding plumage has less red.