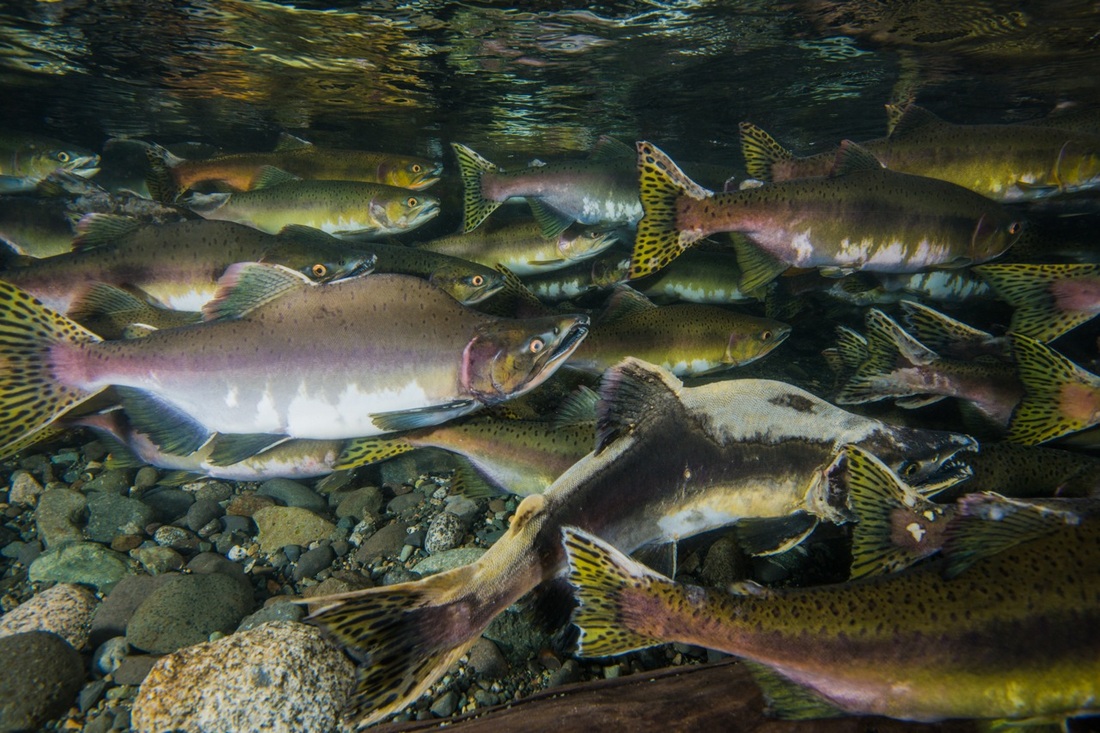 Identification
Pink salmon are the smallest of the Pacific salmon species, weighing a maximum of 15 lb (usually 3-11 lb) and measuring up to 30 in. long (usually 18-24 in.). They have a relatively rounded shape. Non-spawning pinks are characterized by a blue-green colour with silvery sides and black dots on the tail fin and back. Spawning males develop a large hump in front of the dorsal fin as well as a sharply-hooked nose. The jaws also swell so the mouth can't fully close. Click here for an illustrated identification guide for the marine (non-spawning) versus freshwater (spawning) phases of pink salmon.

Habitat & Range
Pink salmon are anadromous, meaning they live part of their life in the ocean and part in fresh water. Fry hatch in streams, rivers, and sometimes lakes in spring and immediately migrate out to sea. They stay close to shore for a few months before migrating to the open ocean (click here for a Pacific Northwest pink migration map; click here for a distribution comparison with the other Pacific salmon species). They spend two years at sea before returning to spawn in their place of birth. The general Pacific salmon migration pattern is north along the coast, westward out to sea, then south and eastward back to the coast. Click here for freshwater distribution map for pink salmon in BC.

Pink salmon tend to prefer colder waters. They are native to both sides of the North Pacific as well as parts of the Arctic Ocean. Their North American range extends from the Mackenzie River along the Canadian Arctic to the Bering Sea, and south to southern California; their range along Asia extends from the Lena River in the Arctic Ocean through the Bering Sea to Korea and southern Japan. Attempts have been made to introduce pink salmon to many areas of North America and northern Europe, as well as Iran and the Kola Peninsula in Russia. They were successfully introduced to the Great Lakes.