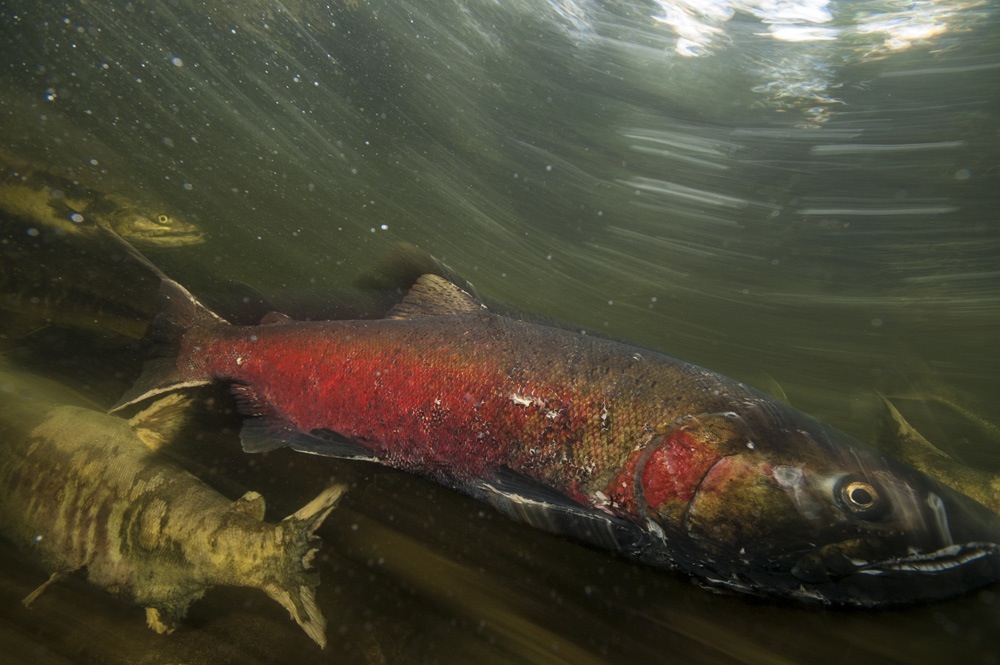 Identification
Coho salmon usually weigh about 8-12 lbs and measure 18-24 inches; the maximum size recorded was 38.9 lbs and 42.5 inches. Adult coho at sea are silver with a dark metallic blue back and silver tail; they have some small spots along their back and the upper lobe of their tail fin. Spawning coho develop bright red sides and dark to bright green heads and tails. The snout on spawning males and females becomes blunt and hooked, and the lower jaw of males becomes swollen so the mouth can't close. Juvenile coho are tinged with orange, have parr-marks, and have an orange sickle-shaped anal fin edged with black and white. Click here for an illustrated identification guide for marine (non-spawning) versus freshwater (spawning) coho.

Habitat & Range
Coho are anadromous, meaning they live part of their life in the ocean and part in fresh water. Fry hatch in fresh water (streams, rivers, or sometimes lakes) in spring and live in freshwater for 1-2 years before migrating out to the ocean. Young smolts newly arrived in the ocean spent time close to shore in shallow water or around piers, where they feed on planktonic crustaceans. They move further out to sea as they grow (click here for a Pacific Northwest Coho migration map; click here for a distribution comparison with the other Pacific salmon species). After two years at sea they migrate back to their place of birth to spawn. The general Pacific salmon migration pattern is north along the coast, westward out to sea, then south and eastward back to the coast. Click here for a freshwater distribution map for British Columbia.

Coho are native to both sides of the North Pacific: in the Pacific Northwest from the Bering Sea, Aleutian Islands, and Beaufort Sea south to northern Baja California; and in Asia from Siberia to northern Korea and northern Japan. Coho have been introduced to areas outside their native range in North America, Europe, Asia, and Latin America; most introductions have been unsuccessful, though there are viable naturalized populations in Alberta, Lake Michigan, Lake Superior, and Chile.

Spawning sockeye salmon (O. nerka) also turn red with a green head and tail; however in sockeye the red extends to the back and fins, whereas in coho the red is restricted to the sides.

Non-spawning sockeye and chum (O. keta) can occasionally be confused with non-spawning coho, though the blue back and dorsal and upper tail spotting on coho are usually sufficient for ID purposes.

Human Uses
Coho are one of the fattier Pacific salmon species and are known for their rich flavour. They are a target sport fishing species due to the acrobatics they perform when caught. Lamb and Edgell (2010) recommend frying a coho steak covered in egg and breadcrumbs. Click here for a recommended recipe from Monterey Bay Aquarium Seafood Watch. More species-specific recipes can be found on Wild Salmon Recipes.

Pacific salmon have been a vital food source - as well as a central cultural symbol - for coastal First Nations groups for thousands of years, and continue to be a key resource for coastal communities today.