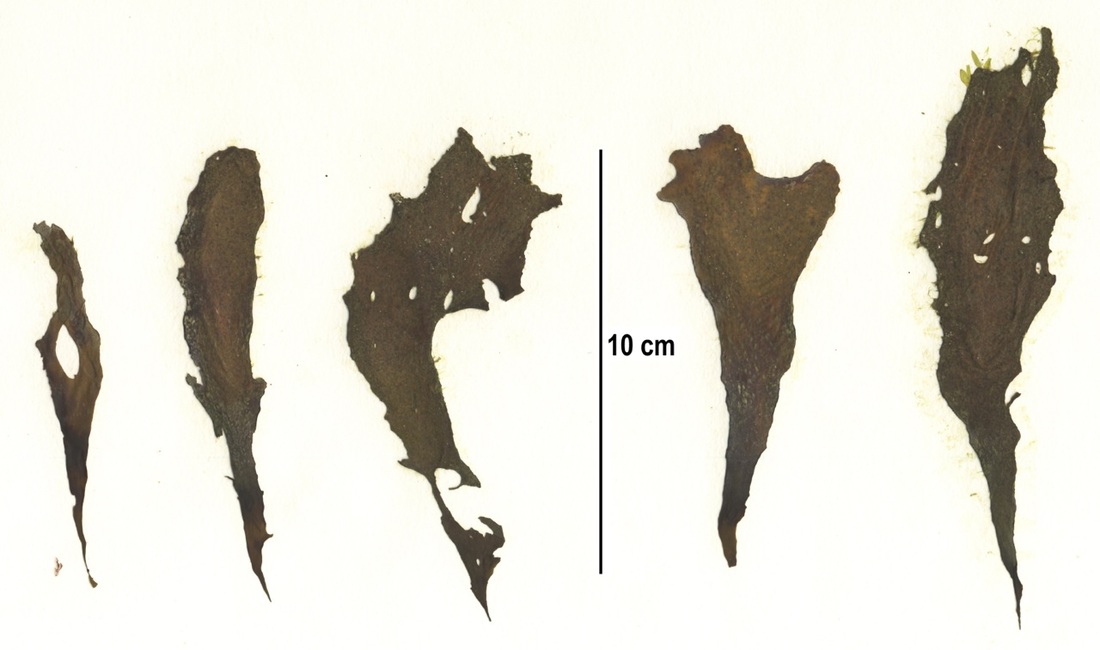 Specimen collection number SCL 15277 in the UBC Herbarium Algae Database. Search the collection number in the database for more information on this specimen, or search the species for further occurrences. Images courtesy of Sandra Lindstrom.
Identification
The thallus of this brown seaweed is composed of multiple irregularly-shaped dark brown blades crowded together. These kelp-like blades, which are not divided, get to 40 cm long and 4 cm wide, and often resemble small kelp blades. Each blade is attached via a thin stipe to the seaweed's encrusting, somewhat disc-shaped holdfast measuring up to 20 cm across. Sand-scoured false kelp blades tend to be worn and ragged-looking, particularly the ends.

Habitat & Range
Sand-scoured false kelp grows on rock embedded in sand in the mid to low intertidal, particularly in locations where it may become partially or fully buried in sand; abrasion by sand gives the blades their tattered appearance. It grows in tidepools as well. The holdfast is perennial. This species is found from the Aleutian Islands to southern California.

Similar Species
​​False kelp (Petalonia fascia) can also resemble small blades of true kelp species. It tends to be lighter in colour than sand-scoured kelp, has ruffled edges, and has a smaller holdfast. It is also found in more sheltered areas, and so lacks the battered, irregularly-shaped appearance of sand-scoured false kelp.

Intriguing Info
This species, a member of the Order Sphacelariales, has the common name "false kelp" due to its similarity in appearance to true kelp species, which compose the Order Laminariales.