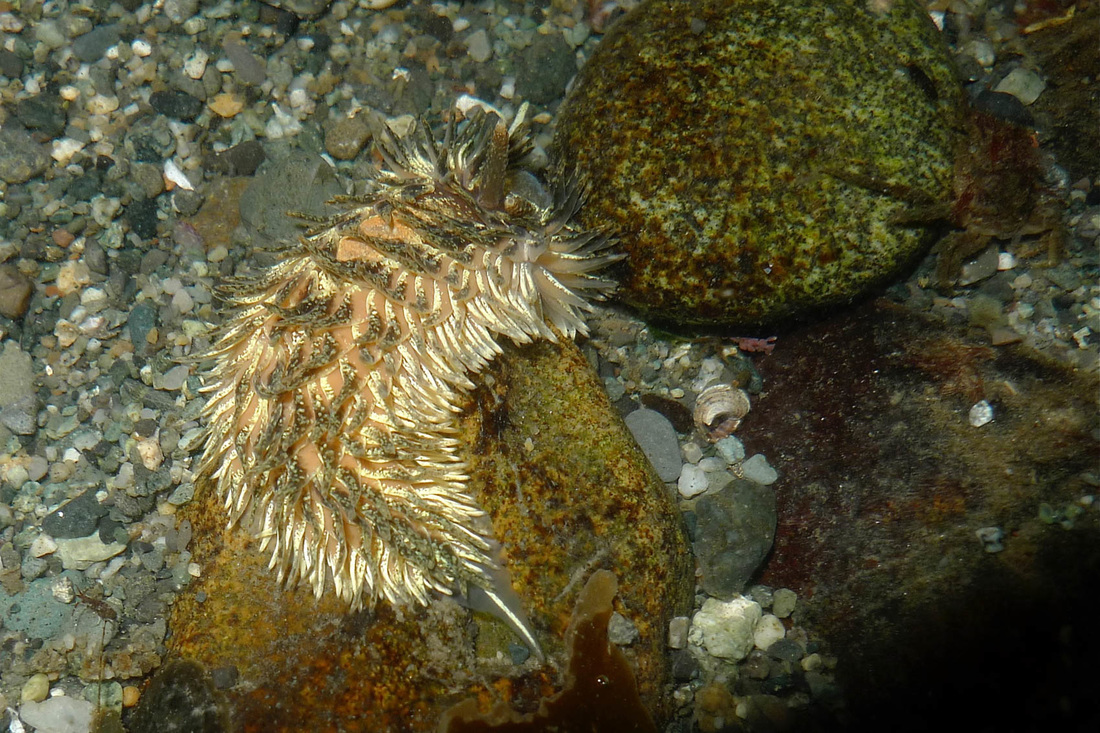 Photo by Todd Carnahan
Identification
True to its name, a dense dorsal covering of somewhat flattened cerata give this nudibranch the furry appearance of a shag rug. While its colouring is usually whitish or brownish, it may also be dull grey, reddish, or pinkish. It also has a bright white triangular to crescent-shaped patch on the head between the ﻿﻿﻿﻿rhinophores﻿﻿﻿﻿ and the oral tentacles. The shag-rug nudibranch can be more than 10 cm long, though it usually measures around 3-5 cm.

Habitat & Range
The shag-rug nudibranch can be found on rocks, docks, or floats, and is commonly found near its anemone prey (see below). It inhabits the intertidal and subtidal to a depth of 900 m. It is found in both the North Pacific and North Atlantic. in the Pacific Northwest its distribution extends from Alaska to Baja California, Mexico.

Intriguing Info
This nudibranch eats anemones, including the aggregating anemone (A. elegantissima, identified by Cowles as its preferred prey), buried green anemone (Anthopleura artemisia), giant green anemone (A. xanthogrammica), proliferating anemone (Epiactis prolifera), short plumose anemone (Metridium dianthus), and painted anemone (Urticina crassicornis). The shag-rug nudibranch can take on some of the colouring of its anemone prey. It also takes up the undischarged defensive stinging cells from its anemone prey and stores them in its gills, for its own defence in the future.