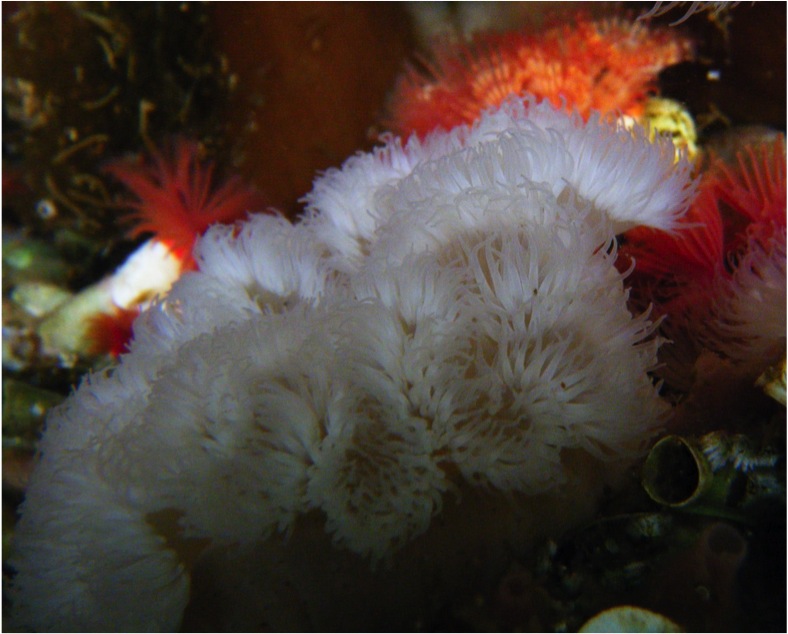 Short plumose anemones growing on a dock. Photo by Jessica Brown.
Identification
The short plumose anemone is a colonial species. It has a smooth column, with an unlobed or slightly lobed oral disc ringed by less than 100 thin, relatively short, translucent tentacles. It is usually white, but can also be brown, tan, or pinkish-orange. It can get up to 10 cm tall, but usually grows no larger than 5 cm.

Habitat & Range
The short plumose anemone is often found in dense aggregations on floats, docks, pilings, rocks, and other hard surfaces. This species has also been reported growing on the carapace and claws of crabs. It is an intertidal and subtidal species, and is found to 300 m deep though it tends to prefer shallower water. It is a circumpolar species, and so is found on north Atlantic and north Pacific coasts. Its range along the west coast of North America stretches from Alaska to southern California.

Intriguing Info
This species spreads colonially through fragments from the base attachment area. Colonies defend their territory against other advancing colonies or anemones using their stinging acontia. Individuals at the edge of a colony develop more extensible tentacles to attack invaders. These tentacles have special nematocysts. The nematocysts and acontia from this species will not noticeably sting human skin, but should not come in contact with eyes or mouths as these areas are more sensitive. This species is preyed upon by the spiny red star.