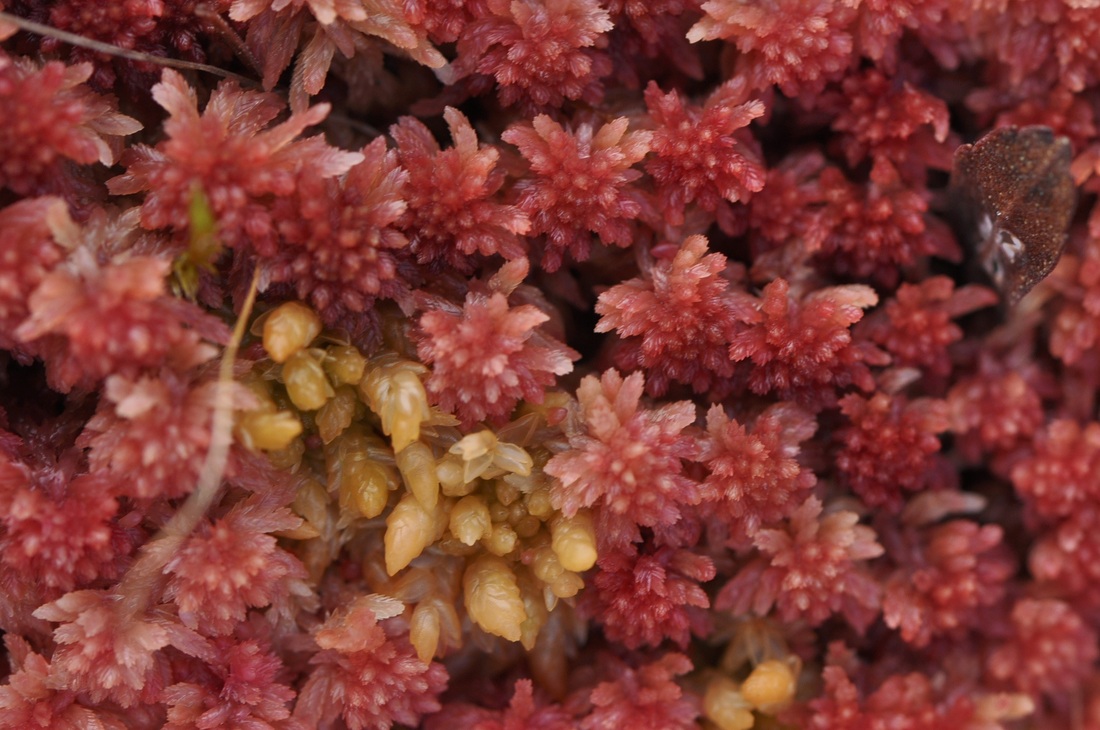 Sphagnum rubellum with a small amount of fat bog moss (Sphagnum papillosum), clearly distinguishable by its brownish-yellow colour. Photo by Kira Hoffman.
Identification
Sphagnum rubellum is a small reddish-coloured peat moss. It has a flat-topped capitulum (head) composed of star-like (stellate) rays, and has tongue-shaped stem leaves. Its stem lacks pores. While it is usually mostly or completely red in colour, this Sphagnum species can turn greenish when shaded. Sphagnum rubellum, along with its similar species, can't be identified just from photos.

NOTE: Sphagnum species in general can be difficult to identify in the field or without considerable experience. Microscope work is often required to ensure correct identification.

Habitat & Range
Sphagnum rubellum forms loose mats over extensive areas. It is a common species in bogs and peatlands, and is found at low elevations. Its west coast range stretches from southern Alaska to California. It has a circumpolar distribution.

S. russowii is also a red peat moss but can be differentiated by its porous stem. It occurs at higher elevations along the coast. Wilf's sphagnum (S. wilfii) and five-ranked peat-moss (S. quinquefarium) are also similar species. Five-ranked peat-moss is found throughout coastal BC, while Wilf's sphagnum has currently only been identified on the north coast and Haida Gwaii. S. rubellum could also be confused with common green peat-moss (S. girgensohnii) and Warnstorf's bog-moss (S. warnstorfii).