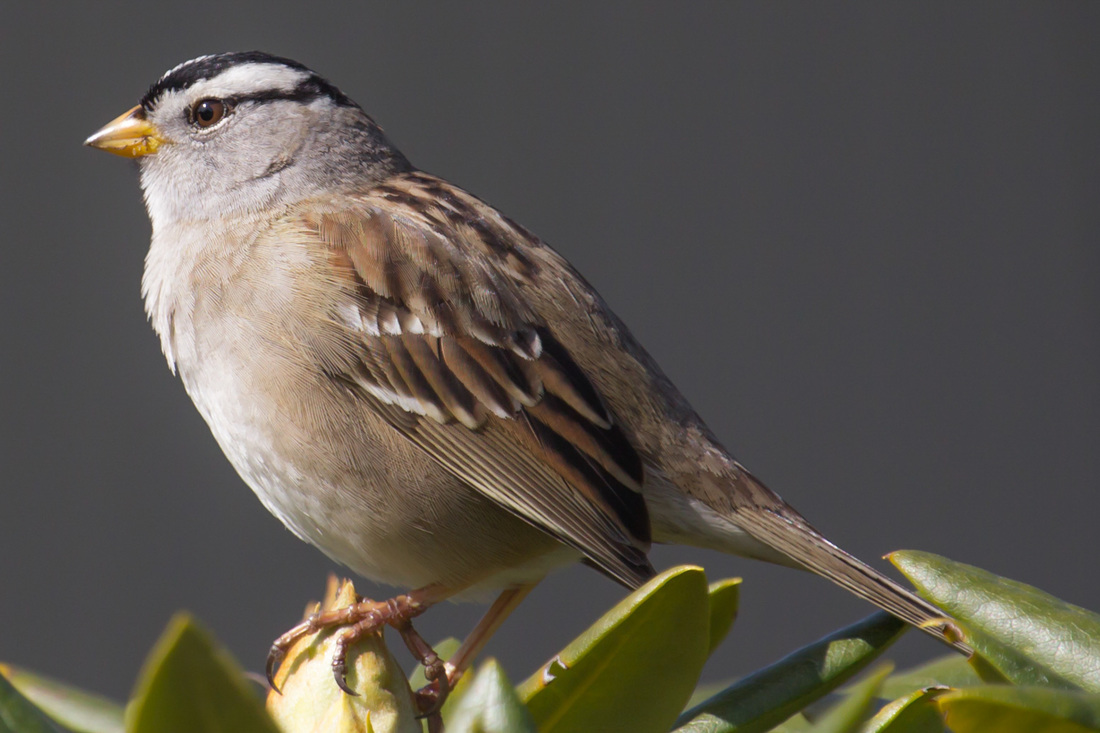 Josh Silberg
Identification
This large sparrow can be identified by its black and white head stripes, which stand out from the rest of its relatively plain and pale greyish-brown body. Only immature birds will be tricky to identify easily: their head stripes, coloured reddish-brown and greyish-buff, are less bold and contrasting. In such cases, look for the bird's small pale bill (coloured pink, orange, or yellow), its long tail, its lack of markings on its throat, breast, and belly, and its large body size (16 cm long with a wingspan to 24 cm). The white-crowned sparrow's song consists of one longer and multiple shorter whistles, followed by a buzz or trill. Click here to listen.

Habitat & Range
The white-crowned sparrow migrates through the Central Coast during spring and fall. It is found in a variety of habitats, from woodlands and forest edges to parks, gardens, thickets, and grasslands. It breeds in bushy and shrubby habitats across northern Canada and just below the timberline in the western mountain ranges; it winters throughout much of the United States and a bit of the southern BC coast.

Similar Species
The white-throated sparrow (Zonotrichia albicollis) has a black and white striped head, but differs with yellow lores, a bright white throat, and a greyish bill. It is not a common species on the Central Coast. The juvenile golden-crowned sparrow (Z. atricapilla) may confused with the juvenile white-crowned sparrow; the former tends to have a yellowish crown — albeit one that is less obvious than the adult's — and a darker bill. It is also often darker overall, with some streaking on its breast.

Intriguing Info
Songs and calls vary between populations and subspecies; these "dialects" have been thoroughly studied by scientists.