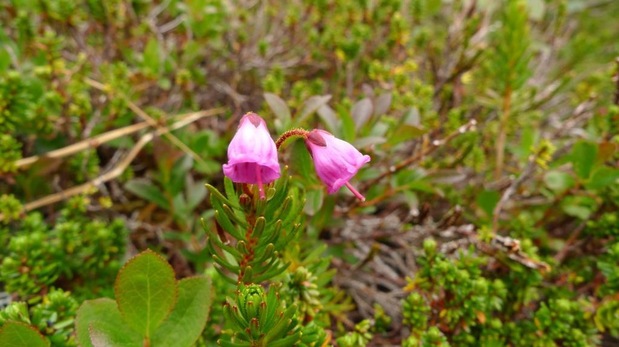 Pink mountain-heather on Mt. Buxton, Calvert Island. Photo by Abe Lloyd.
Identification
Pink mountain-heather is a low-lying shrub with small needle-like leaves and stems that grow upwards to 40 cm tall. When in flower, the pink bell-like flowers are the key identifying aspect of this species, which is more common than the similar yellow mountain-heather. They are found at the top of a hairy stem, in groups of one to many. There are several similar mountain-heathers in the region; see 'Similar Species' to tell these apart.

Habitat & Range
Pink mountain-heather is found in subalpine to alpine environments, though it may be found in rocky sites within coniferous forests as well. The species is common across BC, except for Haida Gwaii and the northeastern part of the province. It is found south along the coast to California, inland to Idaho and Montana, and north to the Yukon and Northwest Territories, and parts of Alberta.